The Race IS ON! 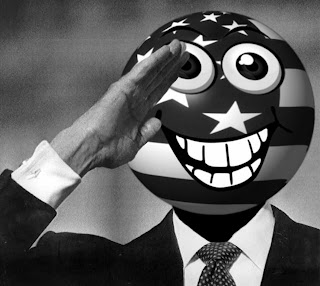 MY FELLOW AMERICANS, I am WannaBePrez. My friends call me WBP. I am the first digital persona to run for the office of President of the United States of America, and I need your help.

Last week I officially launched my campaign at WannaBePrez.com and the response has been - to be quite honest - underwhelming. That is fine, because the largest wave begins as a tiny ripple and I see the waves of discontent washing over the shores of this great nation.

Why, you may be wondering, would a blog want to be president? Well, my friends, I am here to tell you that, while a blog I may most certainly be, I am a proud American who has had just about enough of the bullshit that is bogging down our nation. I feel it's time for REAL CHANGE! It's time to evict the fat old squatters that continue to return to Washington under the auspices of representing the hard working citizens of this land, only to bend over like bus station whores to accept a fat corporate cock wrapped in greenbacks. It's time to repair the crumbling foundation of our, formerly, beautiful home. The digital revolution begins NOW!

Do I still have your attention? Good. Now what does a digital persona, such as myself have to offer you? What change will you receive for your vote? What can WBP do for America? Why shouldn't you simply do what Americans do each year and head to the polls to cast a vote for the candidate that you believe is the 'lesser of two evils'? Well sit back, because WBP is about to lay it all out for you. The following is a condensed rundown of my positions and platforms. Of course, unlike most politicians, I am willing to hear your input and review my position. So, please, feel free to comment, email, or tweet me @WannaBePrez with any feedback.

THE CONSTITUTION AND COMMON SENSE

Two hundred and twenty five years ago a group of visionary rebels gathered in Philadelphia and cobbled together the Constitution. This document began the experiment of American freedom. I believe that we need to return to the very foundation of this country and, if need be, work to change it using the processes that the founding fathers originally laid out for us.

I also believe that we need to institute a COMMON SENSE standard, in this nation, and use that standard to guide our way into the future. While the citizens in the trenches use common sense, on a daily basis, to solve the many crises that they face, the elite that run DC have forgotten what common sense is. If a piece of legislation can't stand to the simple scrutiny of common sense, then it is destined to be a failure and should not even be considered by the legislature. I will bring common sense back to ALL facets of the government.

PAST, PRESENT, AND FUTURE


I believe that this great nation, in order to advance into the future, needs to reconcile issues of the past, deal with issues of the present, and build the foundation that will springboard the US into the future. We must, as a people and a nation, address all three facets of our timeline in order to heal and move forward, unencumbered, into the amazing future that lies ahead.

The United States of America has, when compared with most nations, a very short past. In a matter of two centuries we rose to prominence as a beacon of freedom for all the globe to see. The shining light of that beacon has tarnished somewhat, over the past few decades. In order to return this nation, once again, to its position at the forefront of the world economy I believe that we need to address some issues of our PAST while honoring the promises we've made to the generations that sacrificed to make us great. Veterans benefits, social security, and medicare are all programs that should NEVER be cut, because they are based on promises to generations which served this nation faithfully. If we can't have the common decency to honor the debts to our own citizens, then we will never be able to stand as a world power.

The PRESENT, as I'm sure you are all aware, is full of myriad issues that are each chiseling away at the foundation of our country. While I could go on forever on these topics, I will only highlight some of the top priority issues that I believe are immediately pertinent to correct our course.

1. I will legalize, and regulate, MARIJUANA and all naturally occurring drugs.  For fart too long these natural substances have been classified as criminal. Well, those days will end. I will end the WAR on DRUGS and start the WAR on POVERTY. Rather than lock people up because they dared to alter their reality using a plant, I think it would be much more beneficial to this nation if we actually altered the reality of those mired in poverty.

2. NO MORE LOBBYING. When you look at it lobbying is legalized bribery. While no promises are made, the effect is understood. If the lobbyists want to sway the votes of OUR representatives then they should lobby US, the citizenry. Lobbying a politician directly circumvents the citizen and therefore circumvents the system of government established in Philadelphia all those years ago. Sorry lobbyists, I'm sure you can find a job in advertising or used car sales.

3. No more PRISON FOR PROFIT. Allowing for-profit companies to make money off of locking humans in cages is tantamount to slavery. The Prison systems in the US will have to become state run facilities once again. Shouldn't be too hard once all of the marijuana offenders are released.

4. TRUE HEALTHCARE REFORM. It is time to reform the bloated healthcare system by going to the roots of the cost problem. The insurance companies, the drug companies, the giant healthcare companies, and the lawyers are all going to need to trim the fat, if I am elected. Quality healthcare should be available to every citizen of the United States without forcing them into poverty.

5. TRUE EDUCATION REFORM. No Child Left Behind has done nothing but leave countless children behind in their education. I will eliminate it. I don't believe that test scores of students accurately reflect the work that a teacher has done. There has to be a better way. Which leads to:

5.5. ART AND MUSIC programs will return to all public school systems. We must allow the right brain to develop as we cram statistics and figures into the left brain. Education can not be thorough if only half of the brain is allowed to develop.

6. JUDICIAL REFORM. Lady Justice is supposed to be blind and fair. Recently those ideals have been shed from our justice system. Everyone in America has the right to FAIR and JUST judicial system. I will take steps to insure that the scales of Lady Justice are, once again, balanced.

7. COLLEGE REFORM. No longer will colleges and universities be able to exploit young players on their sports teams to rake in billions of dollars a year, while raising the cost of education for each student. College tuition needs to reigned in to a point that a young mind is not enslaved to the system under a mountain of debt before they are even able to earn ONE dollar.

8. AGRICULTURAL REFORM. Heads up MONSANTO, this one's coming your way. No longer will companies be allowed to patent a life process. Giant corporations now rule our amber waves of grain. Those days will come to an end, when I am Prez. The American farmer is a cornerstone of this nation and we have allowed corporations to destroy that cornerstone. How can a nation expect to lead the world if it won't be able to feed its own people?

9. WALL STREET and BANKING REFORM. The economic shit storm that the banks and investment companies laid onto the shoulders of the American people is criminal. I will make Wall Street accountable for the damage they have caused. Never again, will TOO BIG TO FAIL be a defense. If a company is too big to fail then they are obviously violating anti-trust laws.

10. INTERNET AND TECHNOLOGY. These are an issue of the present that will absolutely effect our future. I want to make affordable internet access available to all Americans. I also want to see a laptop or tablet in the hands of every American student. We need to embrace, and advance, technology to insure the future of this nation. We also need to keep the internet open and free. I will fight any internet CENSORSHIP, no matter what form it may be disguised in.

Now those are only ten, among hundreds of, issues that I believe need to be addressed immediately to help America move back to the forefront of the world economy. Many of these changes will hurt in the beginning, but the profits they will bring this nation, and future generations, are exponentially greater than any sacrifice we may endure.

Now for the FUTURE:

THAT'S IT, FRIENDS. There are the basic components of my platform. Ready to cast your vote for me? No? Good. I want votes from people who, rather than jumping to a conclusion, exercise their mind and need more information in order to form an educated decision. If I am going to get elected Prez, then I need you. I need your agreement. I need your dissent. I need your input, and your questions. I need your scrutiny. Any idea worth believing in should be able to stand the tests of dissent and scrutiny. If they crumble, then they weren't valuable ideas.

In the coming weeks I will expand on the ideas I have listed here. As you can see, I'm rather long winded at times. I promise to work on condensing my ideas to suit the internet attention span.  I will also, hopefully, address holes in my ideas. Holes, that I hope, you will point out, and pick at, and challenge. You, my fellow Americans, are my greatest resource.

Posted by WannaBePrez at 8:19 PM

WannaBePrez
I am a digital citizen of the United States who has grown so sick of the current state of politics that I have decided to throw my hat into the ring and run for president. I want you to run with me. We will never win, but maybe we can cause some conversation. The largest wave starts as a tiny ripple.